Habanero is a young yet very successful provider of gaming content, based Kiev, Manila, Sofia and Johannesburg. It started its way to great achievements in 2012, targeting at Asia’s markets

Habanero is a casino game software maker founded in 2010. The company has offices in Ukraine, Bulgaria, South Africa and the Philippines. Habanero slots and backend systems have been certified by BMM Testlabs and iTech Labs which evaluate the fairness of online games.

By the end of 2016, all Habanero games were switched to HTML5. HTML5 provides smooth and modern gaming that works without any plugins in all devices including tablets and mobile devices. 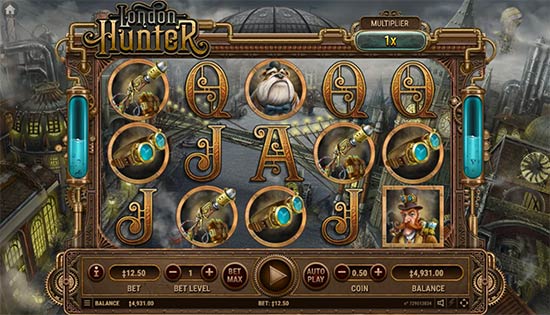 This is London Hunter slot game from Habanero.

Here are some features of Habanero slot games.

Here are some of the newest Habanero slot games.

Loony Blox features a cool Character Feature. During the base game, either the Elephant, Dog or Bunny character is visible on the screen for up to 250 spins. After that the character will be replaced by another character. 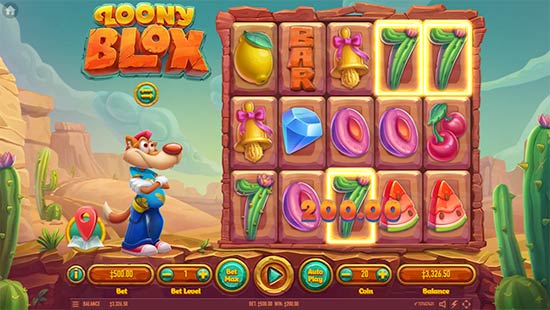 This is the Loony Blox slot game. Here the Character feature is the Dog (or whatever it is?), that will activate the wins to pay both ways.

These are the different features for characters: 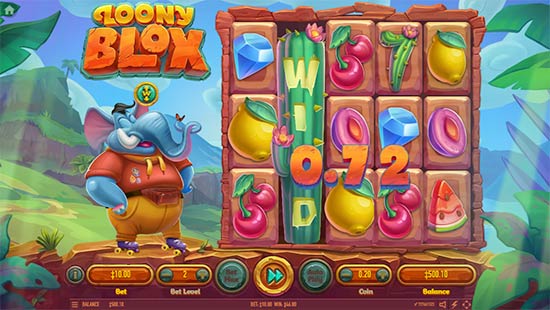 The Elephant character will enable the Wilds symbols to expand to the whole reel.

The Map Feature is triggered if any of the Character symbols appear in a winning combination during the base game. Then the 3 different Car symbols will move for 1 dot for each triggering Character symbol. If multiple directions are available, a single direction will be chosen at random. 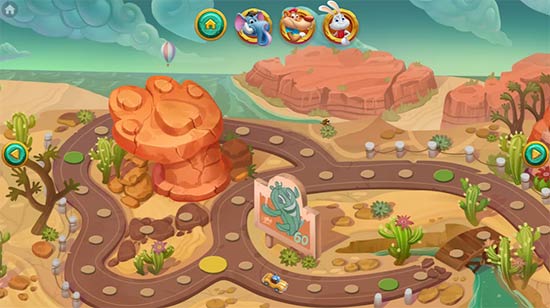 This is the Map Feature. If you hit any of the Character symbols (Dog, Elephant or Bunny), the car that belongs to the Character will move the amount you got the symbols. If the car stops to a Green spot, you will be awarded the Bonus Game of 12 Free Spins. 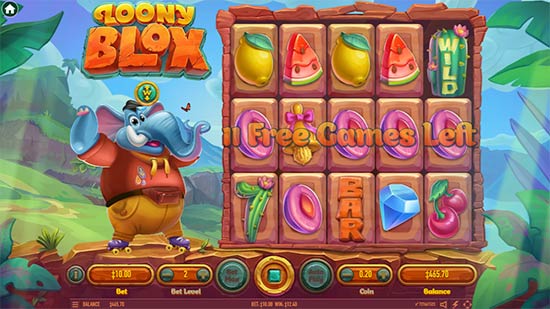 In overall Loony Blox has really cool and special features like the Characters and the Map Feature. The general feeling is really happy and the music and graphics are like from a high quality Disney cartoon.

Also the RTP (Return to player) percentage is quite good with 96.71 %. Definitely take a look on this slot if you are into comic themed slots.

Wild Trucks is testosterone-pumping slot game with cool trucks, skulls, pistons and diesel smoke. And good old rednecky flamed baseball caps and fuzzy dice of course. As a petrolhead, this is a game for me! 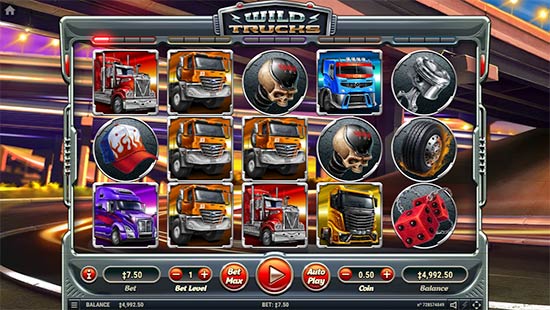 This is adrenaline pumping slot Wild Trucks from Habanero.

If you collect 4 of the Trucks in order Red – Yellow – Purple – Orange – Blue respectively on the reels, you will be awarded a full reel Wild symbol. The Wild happens randomly on any reel. 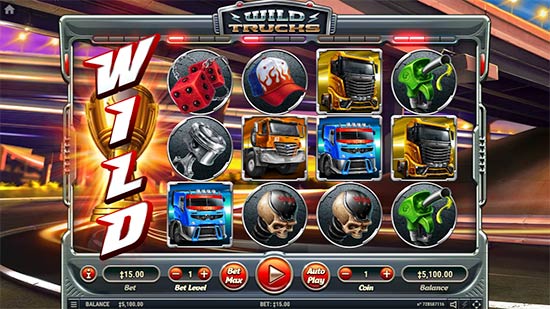 If you hit the same Truck symbol on reels 1, 3 and 5, that triggers a Free Spins Bonus Game. Also Wild symbols can substitute the Trucks on this case.

The amount of free spins is based on the Truck type. If you hit these trucks on reels 1, 3, 5 you get:

There is a also a huge Free Spins Jackpot. If you hit the Wild symbol on reels 1, 3 and 5, you will be awarded 75 free spins! 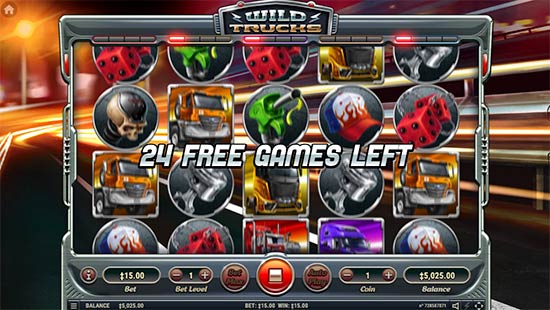 The Free Spins Bonus Game is very generous with up to 25 or even 75 free spins!

During the Free Spins Bonus Game, if 2 or more of the same Truck symbol appear on the same row, all symbols between the same leftmost and rightmost Truck symbol will be changed to Truck symbol before pays are awarded. This goes for the longest and the highest paying Truck symbol for each row only.

In conclusion Wild Trucks is a fresh slot game with good petrolhead spirit. Also the bonus features are interesting and keep the flow going on. The feeling is that there is something happening all the time, so there are a lot of features in this slot. My recommendations to Wild Trucks!

Here are some of the most popular Habanero slots introduced.

Ways of Fortune is 5 reel Japanese samurai-themed slot with unique reel grid of 3-3-4-4-4. The topmost 3 symbols on reels 3, 4 and 5 are always the same random symbol, except the Horse symbol.

The game has very nice old times Japanese atmosphere with peaceful music and cool animations. The feeling is immersive and well made. 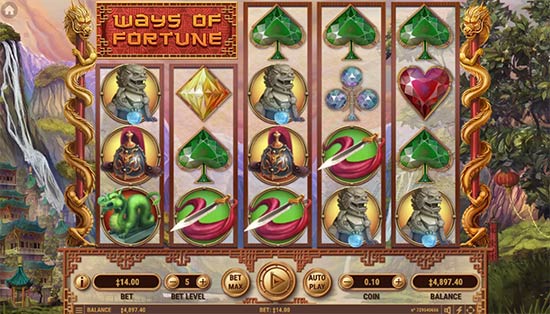 This is the Ways of Fortune slot by Habanero.

The Samurai symbol is the Wild symbol and substitutes all symbols except the Horse symbol.

The Horse symbol is the Scatter symbol. If you hit 3, 4 or 5 Horse symbols anywhere on the reels, you will be awarded 10, 15 or 20 free spins respectively. 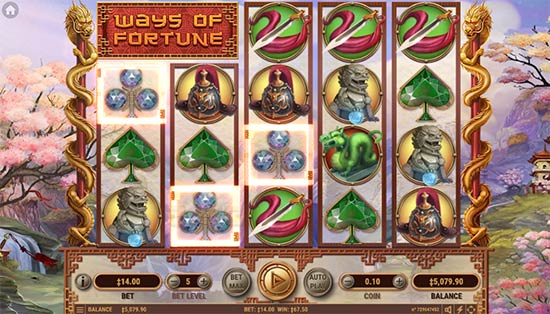 Some gameplay of Ways of Fortune slot. 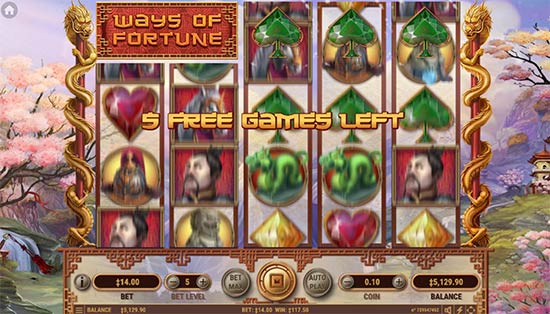 This is how the Free Spins Bonus Game looks like.

In overall Ways of Fortune is quite good slot game with unique reel grid. The bonus features could be little more exciting in my opinion. However the slot works great as a whole and is worth testing out for every Samurai fan.

Jump! is 5 reel fruit slot game with interesting 2-2-3-4-4 reel structure. The reels are variable and keep increasing in rows for each respins you get awarded.

The Joker Hat symbol is the Wild symbol and substitutes all symbols. The Joker can appear only once on screen during the base game. 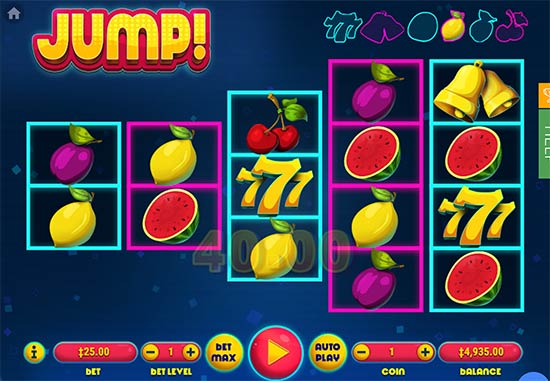 This is Jump! slot game from Habanero.

Also any Joker symbol will award a re-spin. Any win during respins will award another respin. The reels will expand on each respin. 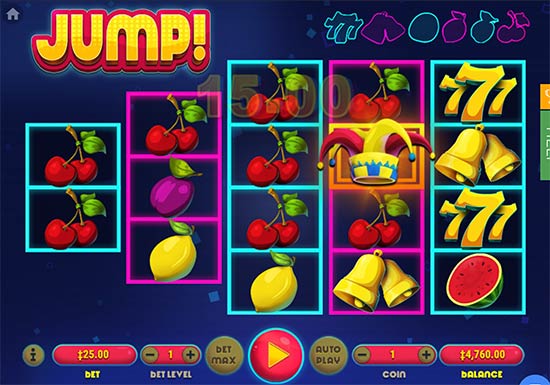 The reels will expand in rows after each re-spin awarded.

A bonus game of 7 free spins will be awarded once after 4 re-spins played are played succesfully. The bonus game has bigger reels with full 5 x 4 symbol grid.

The Joker symbol sticks to the reels during respins and the bonus game and jumps to adjacent block every spin (where reels are the same size). 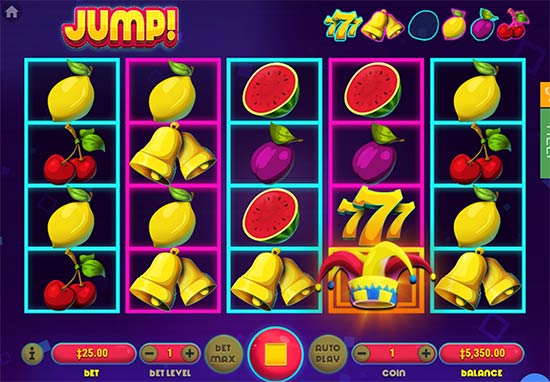 This is the Free Spins Bonus Game that will be played with full 5 x 4 reels.

In that feature 5 of the same random symbol (excluding the Joker) will appear anywhere on the screen before the reels land.

Jump! slot game was a nice surprise. The slot is quite simple but is exciting with the variable reels and respins. Also hunting for the stacked spin keeps going on. If you are into fruit slot games, Jump! is a great one with interesting features.

These are the highest RTP (Return to player) percentage slots I found from Habanero.

London Hunter is steam punk themed 5 reel slot with old Victorian London feelings. There are symbols with moustached gentlemen with huge laser weapons…and dinosaurs of course. The theme is very interesting and fresh take on the classic subject.

This is London Hunter slot game from Habanero.

The Dinosaur symbol is the Wild symbol and substitutes all symbols. It appears only on reels 1 and 5.

Also 2 expansions can occur if 2 Moustache Man symbols appear together with 2 Dinosaur symbols.

The Multiplier Feature is activated when the Left Fuel Tank is filled to capacity in the base game. It’s deactivated when any win occurs. All wins are multiplied 3x when active. 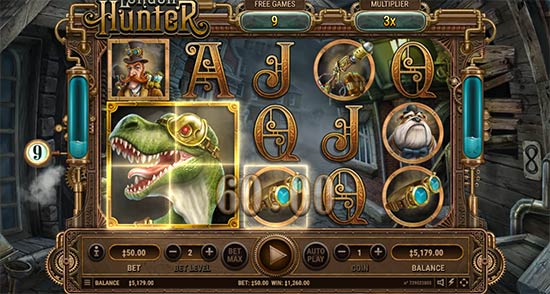 This is the Free Spins Bonus Game in London Hunter.

Both Fuel Tanks will fill to capacity during 2 – 6 spins in the feature.

In general London Hunter is a very cool slot game with fresh theme. Also the RTP (Return to player) percentage is very good with 97.94 %.

Winz Casino
Winz Casino claims to be the best crypto gambling establishment in the market. It supports its claim by presenting various opportunities and customer-oriented understanding

SBOBet
Winner of the Asian Operator of the Year Award for the year 2009 and 2010, with operations in Asia licensed by the Government of the Republic of the Philippines through the Philippine Amusement and Gaming Corporation (PAGCOR)

1xSlots Casino
1xSlot Casino operates from Cyprus and has a license from the island of Curacao to operate as a fair and safe gambling platform. The website is owned by Orakum N.V. and was launched in 2017. This is a very new name in the online gambling industry but it is regularly making strides to become one of the top names.

Gold Deluxe
Gold Deluxe is an Asian-facing developer of live dealer games established in 2011. The company is based in Philippines and currently employs more than 100 individuals. They’ve made their portfolio available at many of the leading gaming sites in Asia, and while still focused on Asian markets, the provider is also starting to deploy their products in other parts of the world.
Casino Tips

Online Casino: What You Need To Know About Playing in Singapore
4 months ago

Which One Should You Play, Online Poker, Slots or Roulette?
6 months ago
Best Online Casino In Singapore
Responsible Gambling

Online casinos in Singapore are
the focus of LiveCasinoSG.com. Read More