Betsoft is very experienced online casino game provider founded in 2006. In 2014 the company acquired Class 4 license with Malta Gaming Authority (MGA). Since then there has been a lot of development and in 2016 the company shifted the slot games from old Flash technology to modern HTML5.

Betsoft is very experienced online casino game provider founded in 2006. In 2014 the company acquired Class 4 license with Malta Gaming Authority (MGA). Since then there has been a lot of development and in 2016 the company shifted the slot games from old Flash technology to modern HTML5. 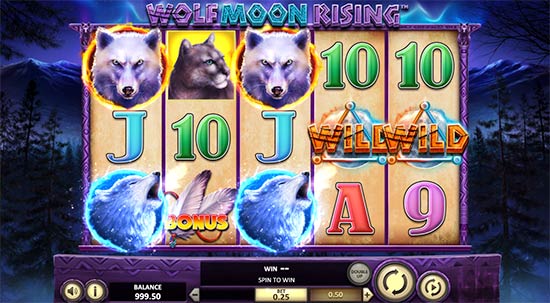 Here are some features of Betsoft slot games.

Here are some of the newest Betsoft slot games.

Total Overdrive is a brand new 80’s themed slot game established in February 2020. The music, sounds and atmosphere is very futuristic, kind of what the people living in the 1980’s would think about the future to be.

Basically this slot is a 3-reel classic fruit slot with special Multiplier features. 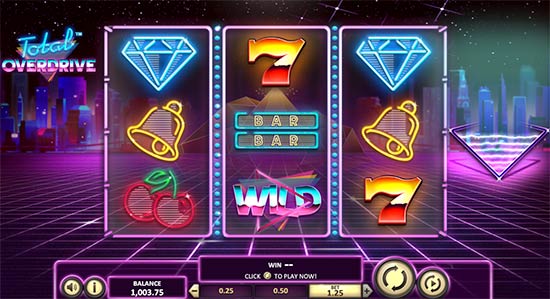 This is Total Overdrive slot game from Betsoft.

Here I got many consecutive wins and the multiplier is now 4x.

Every winning spin has a chance to award a Sticky Multiplier. The multiplier will be Sticky for 8 spins (indicated by a hold meter) even if there are spins with no wins, granting more chances for the Multiplier to go up.

I tried to find the find the Hold Meter, but I couldn’t find it anywhere on the slot. Even though I had a Sticky Multiplier at some point.

However the Sticky Multiplier can re-trigger while the hold is active, refilling the hold meter to full, pushing the wins into Total Overdrive as the slot info screen states. This feature I couldn’t unlock in my tests. 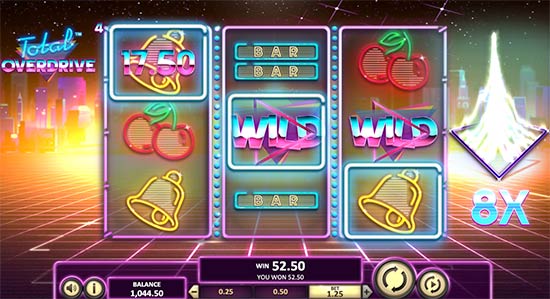 Multiplier at 8x – My head was at a Total Overdrive.

Total Overdrive is a slick slot game with cool 80s futuristic feeling. For my personal taste the bonus features were a little too simple. There is no Free Spins Bonus Game as in many other slots.

Nice, more wolves! Wolf Moon Rising is a wolf & wilderness themed slot game with exciting thriller or adventure movie typed soundtrack. For some reason almost all game providers have some kind of a Wolf slot game in their selection. But I don’t mind at all. Let’s take a look on this Betsoft’s newcomer.

The Elemental Wild symbol substitutes all symbols except Feather Talisman and Wolf Moons. The Wild symbol is also the best paying symbol with huge win multiplier if you hit 5 x of those. The multiplier is 10,000x bet in that case!

If you hit 3 or more Feather Talisman symbols (Bonus), you will be awarded 12 free spins. In the free spins, all wins are doubled. 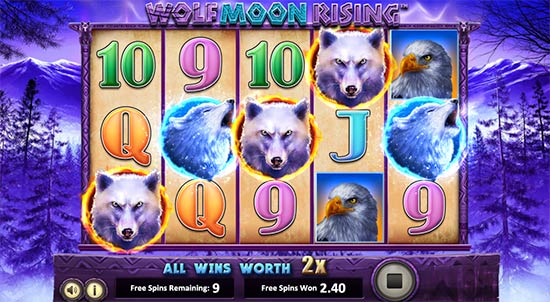 During the bonus free spins, all wins are worth 2x.

In overall Wolf Moon Rising was pretty good slot game with cool purple-blue theme. The bonus game is also cool with double winnings on each spin. Wolf Moon Rising is worth testing out if you like these kinds of wilderness themed slots.

Take the Bank is a new bank rob themed slot founded in October 2019. The slot has a special feature. The game is played in rounds of 10. Each time you spin, a Master Bomb Counter counts down from 10 to 0.

Each Robber symbol will convert into Bombs which stay in position. After 10 spins the Bombs turn to Wild symbols. 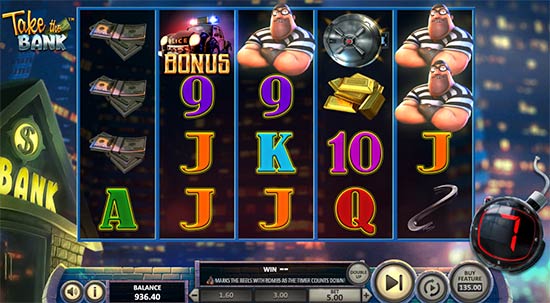 This is Take the Bank slot game from Betsoft. Here the Master Bomb Counter is at 7 and these robber symbols… 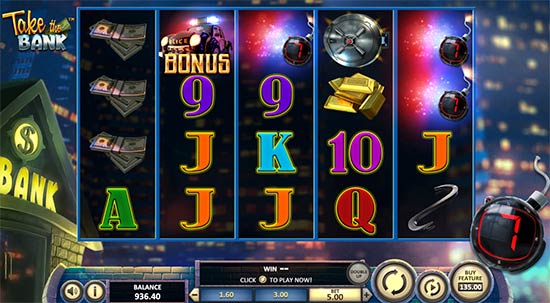 …turn into bombs. Bombs stay in place until… 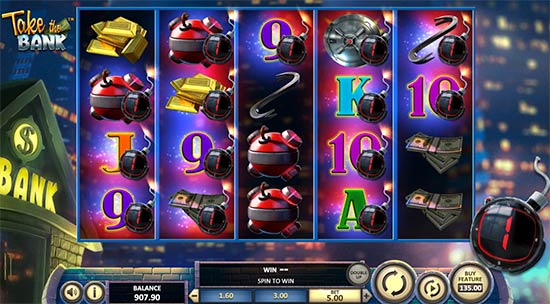 …the counter reaches to zero. Then all bombs turn into Wild symbols. 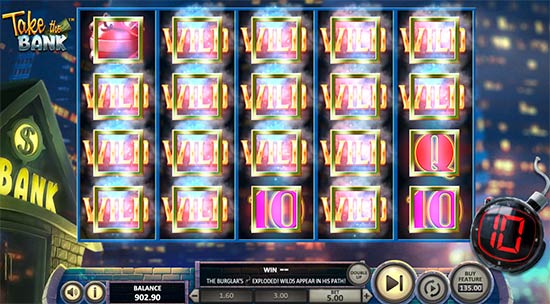 In this test play I was super lucky as more and more Robbers came into the reels on the last spin and all these symbols turned into Wilds.

Wild symbols substitute for all symbols except Police Cars and Robbers. If you hit 5 x Wild symbols on a pay line, it will act as 5 x Diamond payout (Diamond is the highest paying symbol).

When 3 Police cars land on the reels, a Bonus Game of 15 Free Spins is awarded. The Master Countdown will be paused during the free spins. In the free spins, there will be 5, 7 or an Epic 10 Wild symbols scattered anywhere on the reels. Each spin the Wilds move to a new location.

You can also buy features in Take the Bank slot game. You can buy a bonus game of 15 free spins with 5, 7 or 10 Wild symbols. 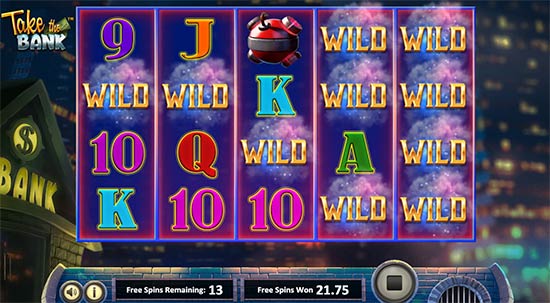 This is an example of the Bonus Game Free Spins. Here the 10 Wilds are on the reels and change places each spin.

In conclusion Take the Bank was pretty interesting and innovative slot game. The counter and the bonus game especially nails it. However you must be extra careful of your money, as the 10 spin increments can be addictive to go “one more round” again.

The RTP (Return to player) is on average/low level with 96.08 %. Also the volatilty is on Medium level, which means more smaller wins more often.

Here are some of the most popular Betsoft slots introduced.

Greedy Goblins slot game is quite old Betsoft slot game founded in October 2013. On that time this slot was probably totally hi-tech, but now in 2020 it looks a bit oldish. Also the slot runs on obsolete Flash technology, which was invented in the stone age. Flash has a lot of security issues and other problems, so I actually cannot recommend this slot now.

But I anyway took a look to the slot if you want so see how this old classic looks like. You can really notice the Flash background as the slot has a lot of lag in the controls and the animations are jerking a little. 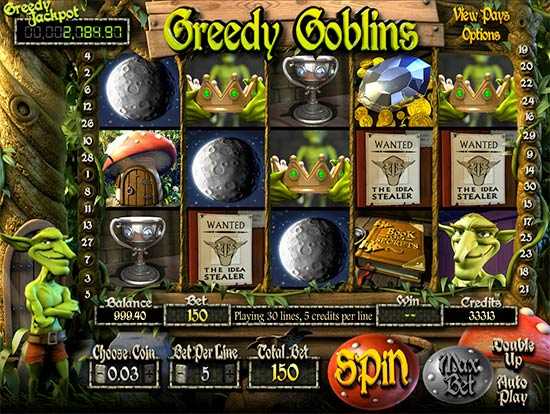 This is Greedy Goblins slot game from Betsoft.

You can win the Jackpot on 5 x Elf symbols on maximum bet level.

When 2 or more Gold Coin symbols occur on anywhere on the reels, the Goblins will rush out to collect it. Each collected coin will cause new symbols to cascade in from above. Any new combinations that occur as a result of the coin collection will form new payouts.

When the Wild symbol (the Goblin house) occur on the reels, a random number up to 3 respins will be awarded. If you get 2 Wilds, you get up to 6 respins. The reel of this symbol will change to a Wild reel for the time of the respins.

If you hit 3 or more Elfania signs on anywhere on the reels, the Free Spins mode will begin. During the free spins, certain icons will have up to 10x multipliers. Jackpot cannot be multiplied.

There are even more features in Greedy Goblins slot. If you get 2 x Book of Secrets symbols, a Bonus Round is triggered. You can control the Goblins as they rob their enemies in the Elfanian nation. You can hit awards until the Collect price symbol is revealed.

To be honest, this slot didn’t impress me. It’s old and slow and I really didn’t like the theme either. But that is just my opinion or course!

Fruit Zen is a very delicious fruit slot game founded in 2014. Like the name suggests, the feeling is also very zen-like with calm atmospheric music in the background. 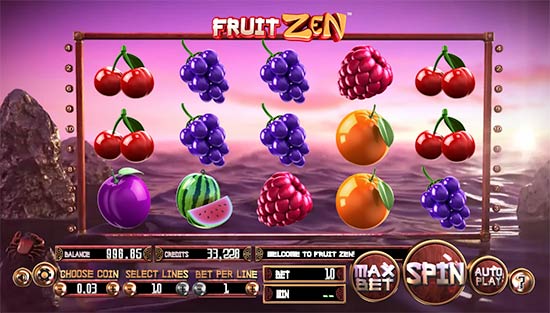 This is Fruit Zen slot game from Betsoft.

Fruit Zen features are very minimal. The Fruit Zen Wild symbol will expand to the whole reel. These symbols can occur on reels 2, 3 or 4. When triggered, a respin will also happen. 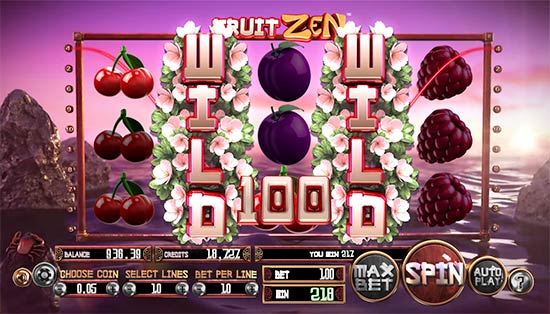 If you hit Fruit Zen Wild symbols, they will expand to full reels.

That’s it pretty much, there is no Scatter symbols or bonus games available in Fruit Zen.

For me, Fruit Zen slot game is maybe too simple and boring. I would want some action and maybe more interesing features like a bonus game or something. But go and see yourself if you like this zen-like calmness of Fruit Zen!

Winz Casino
Winz Casino claims to be the best crypto gambling establishment in the market. It supports its claim by presenting various opportunities and customer-oriented understanding

SBOBet
Winner of the Asian Operator of the Year Award for the year 2009 and 2010, with operations in Asia licensed by the Government of the Republic of the Philippines through the Philippine Amusement and Gaming Corporation (PAGCOR)

1xSlots Casino
1xSlot Casino operates from Cyprus and has a license from the island of Curacao to operate as a fair and safe gambling platform. The website is owned by Orakum N.V. and was launched in 2017. This is a very new name in the online gambling industry but it is regularly making strides to become one of the top names.

Gold Deluxe
Gold Deluxe is an Asian-facing developer of live dealer games established in 2011. The company is based in Philippines and currently employs more than 100 individuals. They’ve made their portfolio available at many of the leading gaming sites in Asia, and while still focused on Asian markets, the provider is also starting to deploy their products in other parts of the world.
Casino Tips

Online Casino: What You Need To Know About Playing in Singapore
4 months ago

Which One Should You Play, Online Poker, Slots or Roulette?
6 months ago
Best Online Casino In Singapore
Responsible Gambling

Online casinos in Singapore are
the focus of LiveCasinoSG.com. Read More